English translation from the original Hindi:

Do not go out alone in the dark, 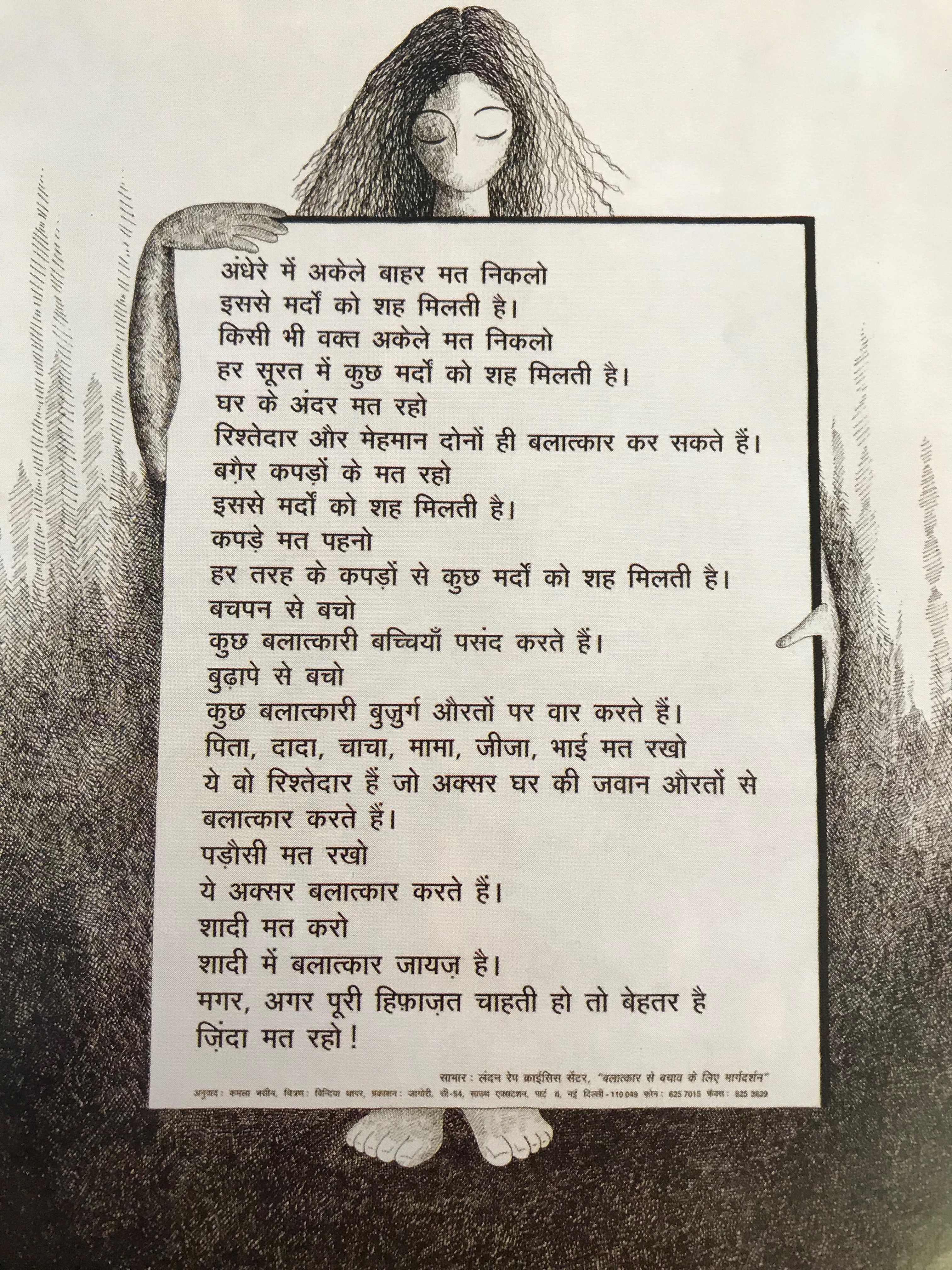 men get excited by this.
Do not go out alone at any time,
some men get excited in such situations.
Do not stay inside the house,
both relatives and guests can rape.
Do not stay without clothes,
this excites men.
Do not wear clothes,
some men are excited by all types of clothes.
Save yourself from childhood,
some rapists like children.
Save yourself from old age,
some rapists assault elderly women.
Do not keep a father, grandfather, uncles, brothers-in-law, brothers,
these are among those relatives that often rape the young women of the household.
Do not keep neighbours,
they sometimes rape.
Do not marry,
rape is justified within marriage.
Rather, if you desire complete safety than it is better not to live at all! [1].

One of the most heinous crimes against women in India, was the rape and fatal assault of Jyoti Singh, who came to be known as Nirbhaya (fearless). A student in her early twenties, Jyoti was gang raped by six men at the back of a moving bus during an evening in New Delhi on 16 December 2012. Not only was she raped by six different men, but an iron rod was used to penetrate her, resulting in serious damage to her intestines and genitals. Her injuries were so severe that sadly she did not survive, despite several surgeries.

The incident caused a worldwide outcry. The eyes of the world turned to India, its law enforcement and justice system. It recently inspired the Netflix series Delhi Crime which depicts the police search for the perpetrators of the assault. The charge of a female authority in this case lent a highly sympathetic dimension to crimes against women, which take place in India at an alarming rate. But it was the BBC documentary, India’s Daughter, broadcast in the UK in 2015, that was most disturbing and shocking.[2]

The use of the offender’s narrative and the justification of the crime by the defence, demonstrated the highest form of victim blaming. Even in the aftermath of such an atrocious act, after the death of the victim, after the suicide of one of the perpetrators, after the world declared its outrage, these individuals continued to believe such actions were justified under the rubric of “she needed to be taught a lesson”. The offender interviewed for the documentary, Mukesh Singh, explicitly blamed the unfortunate woman for his own terrible actions. In his narrative of the most gruesome events, Singh claimed that women should be passive victims and allow the rape to take place. He implied that had she not attempted to fight off her rapists she would have survived. Again, an instance of victim blaming, both Singh and the defence lawyers argued that it was her behaviour that brought on the sexual assault and incited the men to ‘teach her a lesson’. Women, they imply, are expected to conform to certain social codes and transgressions from this code are to be checked by such individuals.

This brings forth the problematic of patriarchy as a solid social more and a form of sexual control in many societies which directs and imposes a pubic patriarchy. [3]. Individuals who uphold such systems of patriarchy, believe it is their duty to enforce such social codes through a form of moral policing, while the woman’s body becomes the site for marking this patriarchal ideology. The woman becomes a passive figure, robbed of all agency, her voice silenced, and her body claimed by another, marking it as a battlefield for the enforcement of gendered norms against so-called ‘modern’ influences.

This brings us back to the poem above. The idea that whatever a woman does, or does not do, she is always in danger of sexual assault. Regardless of how old she might be, whether she goes out or stays home, whether she covers her body or not, whether around strangers or family, she is always in danger of rape. Even within marriage rape can take place, which is something many find difficult to comprehend. The idea that a husband has claim over his wife’s body, to use as and when he desires, is something ingrained into many cultures. The poem suggests that the only way for a woman to stay safe from such crimes is rather to not live at all. Her body is always in danger, as she lives and breathes.

Such ideas and the vicious act of victim blaming causes many victims of rape to remain silent. The idea that it is the victim’s fault, whether male or female, induces the feeling of shame within the victim, and so a majority of rape cases go unreported while the perpetrators roam free of guilt, the victim forced to live with the trauma their entire life.

Culture also plays a large role in the silencing of women. The social ostracism of the victim as ‘damaged goods’, means women fear rejection and isolation due to an incident that was beyond their control. Culture itself is the main perpetrator in this crime. If cultural norms are adjusted to acknowledge women as individuals in their own right, not as the sole carrier of shame and respectability, if victims know they will receive the support they require to not only alleviate some of the trauma, but also bring their attacker to justice, then maybe, just maybe, such crimes could be reduced and women would feel empowered to raise their voices against sex crimes.

Nevertheless, victim blaming has to be checked. No woman can ever be held responsible for her own rape. The idea itself is illogical. Again, it is patriarchy at play. A patriarchy that holds that men are highly sexual and cannot control sexual violence, a patriarchy that holds that male lust is animalistic and prone to sexual assault on the simplest opportunity. Feminism challenges this narrative and gives both men and women their agency to act as individuals in their own right, free of societal norms that discriminate against gender and demarcate gendered spaces. Feminism is not simply about women’s rights; it is about giving women a voice. Women who have remained invisible for centuries. A voice that enriches the human experience and understanding of our societies and their needs. A voice from the darkness to improve the human condition and recognise men and women as individuals in their own right and challenge patriarchal, gendered stereotypes.

[1] All translations are my own. Image from: Kali for Women, Poster Women: a Visual History of the Women’s Movement in India (New Delhi: Zubaan, 2006).