Missionary Criticisms and the Religious Selection of Reform

Social reforms in child marriage and female education were pursued in the late nineteenth century for the uplift of women’s conditions in Indian society. British criticisms on the treatment of women in India, encouraged Indian reformers to pursue changes to their conditions. The circumstances of British colonialism gave female Christian missionaries the opportunity to access Indian women, and report their interactions, as well as their opinions on Indian society and customs. Female missionaries, such as those of the Church of England Zenana Missionary Society, became active in this discourse of criticisms which portrayed Indian women in a miserable and degraded state. Child marriage and the practice of purdah, were particularly attacked by missionaries. These customs were seen as obstacles to the success of female education through mission schools and zenana teaching, through which it was hoped, would eventually lead to their evangelisation. Through missionary journals and reports, these Indian customs were heavily criticised in order to garner support for the missionary cause. At the same time these criticisms affected both Hindus and Muslims in India, who saw both the criticisms and missionary activity as a threat to their culture and religion, prompting a need for reform. 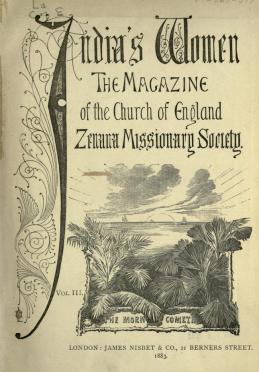 In response to the missionary effort, Hindu and Muslim reformers chose to focus on different aspects of their women’s conditions for their reform campaigns. Hindu reformers worked towards reforming child marriage, as suggested by missionary criticisms. However, Muslim reformers, rather than focusing on the custom of purdah, chose to reform female education. If child marriage was taken by Hindu reformers in response to missionary criticisms, why did Muslims disregard criticisms of purdah, and choose to reform female education? Child marriage and the lack of female education were both problems across Hindu and Muslim women. Yet each religious community decided to take on different reform agendas. What accounts for this apparently selective embrace of reform campaigns for Hindu and Muslim women?

The questions above suggest the importance of religion, and the religious character of reform campaigns in late colonial India. It was the threat of a foreign religion itself which put forward the question for reform, and this threat prompted both religious communities to respond differently. The selection of reform issues by Hindus and Muslims suggests what each thought was important in order to counter this threat and its criticisms. Religion was important to both the colonised and the coloniser in India. Indians attempted to hold onto their religious traditions, while the colonisers, through missionaries, attempted to spread their own. In this context of competing religions, the responsibility of the preservation and continuance of culture and religious traditions was placed on the woman, and so her reform was necessary. Yet how far were these motives influenced by missionary criticisms?

It can be argued that the religious character and segregation of reform campaigns for Hindu and Muslim women, was mainly due to the differences in response by each religious community to the perceived missionary and colonial threat. While each reform campaign operated within a similar ideological framework, which aimed to ensure cultural and religious continuity, and social progress, the differing circumstances and contexts of each religious community in India ensured that the path to reform differed for each. While the Hindu decision to reform child marriage fits in with the missionary discourse which attacks this custom, the Muslim decision to work towards reforming female education needs to be explored in order to understand why criticisms on purdah did not ensure the reform of this custom, but rather the reform of female education for Indian Muslim women.

2 thoughts on “Indian Women’s Social Reform: Why Child Marriage, and Why Not Purdah?”